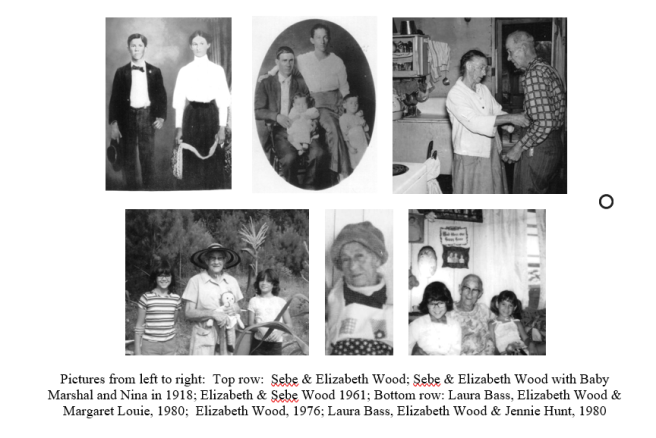 Let me tell you a story about my grannie and her garden. I lived with my Grannie Wood for two and one-half years on a milk farm in Northern Florida. The nearest town was Westville, which few people have ever heard of. We were poor by many people’s standards. To make a long story short, the soil in North Florida is so hard it is difficult to grow a grassy yard even if you could afford it, but my Grannie had a way with a patch of dirt no one else could match. She had flower beds of roses, azaleas, camellias, gardenias, hydrangeas, etc. In between the flower beds was just dirt – reddish, clayish dirt, but Grannie had a way with that, too. So, every Saturday in preparation for Sunday visitors, Grannie swept every inch of the dirt yard and whistled or sang gospel songs.

It is not easy to sweep a dirt yard. You cannot use an ordinary broom or you would create so much dust you could not see what you were sweeping. Grannie made her own broom from green branches that she bunched together. Her broom was not so finely structured she would lose herself in the dust, but rather, open enough to catch the debris and get the job done. When Grannie had combed every inch of her yard and tended her flowers, she would stand at the gate. I can still hear her humming the gospel song, “Amazing Grace,” as she smiled at her flowers and the order she had created where before there were leaves and footprints. When you live on the farm, you quickly find out everyone pitches in. So, it was not long after I arrived at the age of nine and a half years old I found myself sweeping the yard. At that ripe age, I would rather do just about anything else except sweeping some dumb old dirt yard. However, grannies have a way of making you come around. So, on Saturdays, you would find me sweeping and sweeping and sweeping.

If there is one thing I learned from my Grannie, it was if I did not sweep the yard so great one time, she would not scold or criticize; but the next time I would sweep the yard, she would make a suggestion, “And don’t forget to pick up the branches and put them in the kindling pile or sweep all the leaves over here to be burned.” Don’t forget this and don’t get that. Okay, so after a while, I got the point: do it right, Carole. I started doing such a great job that when I was done, I stood at the gate and smiled to myself and the flower beds and the clean paths. You can probably guess what happened next. My grannie beamed as she inspected my work and said, “Carole, you did that so well, you get to do it again next Saturday.”

The way I see it, our lives are like the dirt yard that needs sweeping. The fallen branches are obstacles to overcome and the dead leaves are all the deaths of consciousness, or old patterns, we go through during our lifetime. The emergence of new blossoms and green growth are the birth of miracles we allow to come forth through our cycle of life – when it is our season. The stick broom, of course, is the collection of the parts that make up who we are. When the job is done, and we stand at the gate, is it not a completion and therefore the gateway beyond this garden we call life?