Like Xuanzang, the 7th Century dynasty monk, who went West in search of knowledge from the homeland of Buddhism. 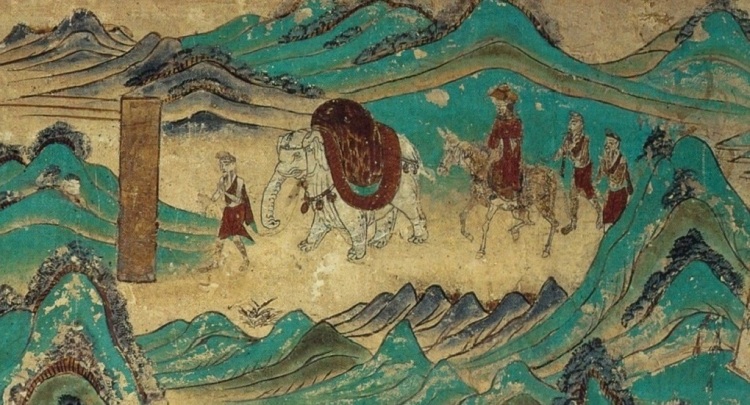 I am heading West in search of the homeland of my Chinese roots. My journey has also been one of discovery about Buddhism, Taoism and even Christianity and the roles they have played in my families’ lives. For although I was raised in the Christian faith, I am open to exploring Buddhism and Taoism and feel I have gained much by what I’ve discovered. Like Xuanzang, I have a thirst for knowledge.

Even though I do not speak, read, or write Chinese, I am moved by calligraphy paintings and slowly but surely I am learning the language. If I do not learn anything else on this journey, I have discovered the truth about my Chinese name. For many years, I thought my name was Louie/Lei Bao Lian, precious lotus blossom of the Louie/Lei (thunder) clan. However, when I showed my Roots guide the paper where Dad wrote my name, he said that it translates to “precious age.”

If that misunderstanding does not complicate the issue enough, there are the various spellings depending on which dialect you choose. Dad spelled my name Bo Line. Obviously, he did not follow the rules of transliteration, but rather created his own. I’m not sure why he told me my name had one meaning but then wrote the calligraphy for another. Maybe, he inadvertently gave me a clue about another lifetime, one as Precious Lotus Blossom. I wouldn’t be surprised because I do remember many life times in China. I believe those memories draw me back to China, and then, I wondered: did Xuanzang have a similar urge to go back to India, to read the original Buddhist texts because he remembered writing them long ago? I cannot say for Xuanzang, but for me the journey West has also been a journey within. How appropos as I explore the teachings of Buddhism. For in my search to find my father’s village, I have learned to overcome suffering, to walk the middle way, and to live my dharma. Even though I may be far from nirvana, I am happier about my journey in this lifetime.