I hear that phrase a lot lately, especially in the political arena. However, an an interior designer, I discovered a type of glassware that I absolutely love: end-of-the-day ware, also known as friggers. See the definition from the Corning Museum of Glass pocket dictionary.

The English term for an object made by a glassworker on his own time. Most friggers were made from the molten glass that remained in the pot at the end of the day. such glass was considered to be a work- er’s perquisite. American glassworkers referred to frig- gers as “end-of-day” objects. They are also known as whimsies. 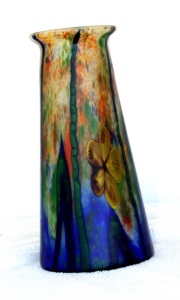 I am eclectic designer, so I applied the same concept to my crocheting projects. Crocheting is relaxing to me, sort of meditative, especially as I deal with the stress of being a caregiver for my Mom. She used to do some excellent crochet pieces. I involve her in my projects because even though she cannot crochet these days, talking about it engages parts of her brain that seem to help her in other ways.

I am just a beginning, but I love the Stash Basket pattern designed by Laura Hontz. Of course, I added my own variations to her design. Here’s what I did with all the bits and pieces of yarn leftover at the end of a project. 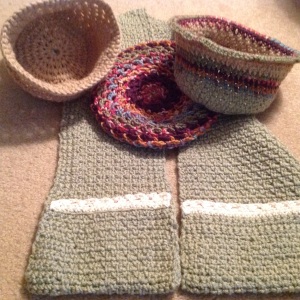 And at the end of the day, I am happy to transform scraps into whimsical creations. Nothing is wasted!

Now, if politicians could figure out how to apply that idea to the challenges that face them.